"It is obvious that from a moral, ethical, or legal perspective, the US position in these policies is an impoverished one."

Maha@Mahablog posts this excellent piece on Reagan and Bush I buddying up to Saddam back in the day, and I learn something new:

Senators Claiborne Pell, Al Gore, and Jesse Helms introduced legislation to impose sanctions on Iraq, and the Senate passed a Prevention of Genocide Act, unanimously, just one day after it was introduced.

My jaw drops, and I make my way to Google Gov to see if any traces of such a bill remain.

I find just a tad bit more than I'm looking for.

The bill summary comes up, all right, in the Library of Congress legislative database (even though it's 100th Congress, and I can't find a way to search Congresses prior to the 101st on the LoC legislation search page). Introduced on September 8, 1988, passed by voice vote the next day, sponsored by notables such as Dick Lugar, Jesse Helms, Carl Levin and one Albert Gore, Jr. . . .

But what are these other two results? Hrm, they seem to be HTML and PDF versions of some article, hosted on .mil sites. That's interesting . . .

In any event, first I seek out what brought me here in the first place:

In early September the Senate unanimously passed the Prevention of Genocide Act of 1988. In its original form, the legislation called for the following changes in US policy toward Iraq:Liberal and conservative senators alike lent their outspoken support to this assertive legislation. Liberal Democrat Claiborne Pell declared, "Iraq's conduct is a crime against humanity. . . . It must be met with the strongest possible response." His conservative Republican counterpart, Senator Jesse Helms, concurred in stating that the Senate legislation "will help demonstrate to the Iraqi regime just how serious our country views its campaign against the Kurds. In addition, it will help assure that United States tax dollars do not subsidize the Iraqis." As members of the Senate saw it, the time had come for exercising whatever leverage the United States held in its relationship with Iraq. However, despite the unanimous support of the Senate, over the course of the next few months, the sanctions bill was systematically watered down, and it eventually died under the heavy influence of both the Administration and opponents within the House of Representatives. 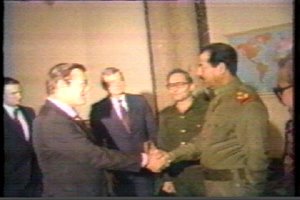 Wow. First I rub my eyes and read that over again, then I check to make sure I am indeed reading a page on army.mil and haven't accidentally clicked away.

One important lobbying group, created in 1985 at the urging of the Iraqi government, was the US-Iraq Business Forum. This group was one of Iraq's major tools of influence inside the US business community, and subsequently it held significant influence inside the American government. At the forum's founding, Iraq's Ambassador to the United States, Nizar Hamdoon, publicly urged corporate executives to join the group, promising that its members would receive preferential treatment in any competitive ventures involving Iraqi government contracts. In addition to a wide assortment of medium-sized and small American businesses, the US-Iraq Business Forum included Fortune 500 companies (AT&T, Bechtel, Caterpillar, and GM), major defense contractors (Bell Helicopter-Textron, Boeing, Lockheed, and United Technologies), and some of the world's largest US-based oil companies (Amoco, Exxon, Mobil, Occidental, and Texaco). In aggregate, the membership of the US-Iraq Business Forum represented a significant cross-section of the commanding heights of corporate America.

At this point I go and check to make sure the article isn't dated April 1.

What in the blue bloody Hell am I reading?

In order to achieve its foreign policy goals, Iraq demanded that its major trade partners in the private sector pressure key members of Congress as well as the White House to block any proposals for economic sanctions or to act in other ways that harmed Iraq. In terms of economic statecraft, Iraq's inverse engagement was a brilliant tactical approach that used Washington's own erroneously perceived strengths to Iraq's advantage.

By this point I actually feel nauseous.

I've asked variations on the same question over and over again of Bush supporters: "You can rationalize the Reagan administration's support for Saddam however you want, but the real problem is: Since the people making policy today are the same ones who refuse to even acknowledge their history of supporting this monster, what reason do we have to think they're not making the same mistakes over again, and creating a whole new monster in the process?"

It's a question they don't seem to take very seriously.

Too certain of the integrity and wisdom of their fearless leader, I suppose. 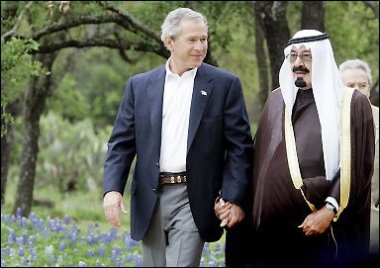