Have You Seen This Man? 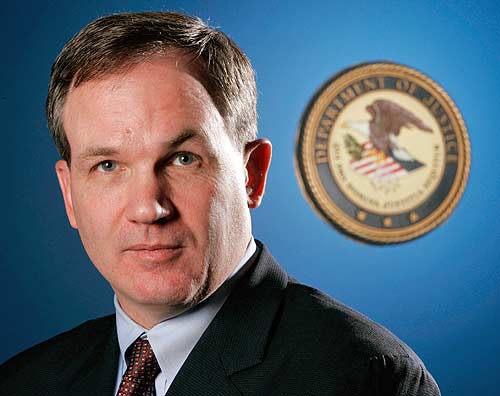 The decision to decline a prosecution in Mr. Rove's case effectively ends the active investigative phase of Mr. Fitzgerald's inquiry because Mr. Rove was the only person known to still be under active scrutiny.

Speaking to reporters on Air Force One on his way back from Baghdad, Mr. Bush told reporters: "It's a chapter that has ended. Fitzgerald is a very thorough person. I think he's conducted his investigation in a dignified way. And he's ended his investigation."

Fitzgerald's spokesman, Randall Samborn, refused on Tuesday to comment on whether the investigation was continuing.

. . . Still nothing. No published statements. No comments to reporters. Nothing new on Fitzgerald's website. Not a bloody word.

Something strange is going on here. The MSM and the White House are pushing the idea that Luskin's assertion that Fitzgerald doesn't intend to indict Rove means that the investigation is now over. And Fitzgerald's office has clammed up.

Josh@TPM suggests that the White House might be preparing to preemptively pardon Libby "to prevent a trial which would certainly lead to the airing of highly embarrassing and morally incriminating evidence about senior members of [Bush's] administration, perhaps including himself."

Did the alleged indictment against Rove (reports of which have been questioned, attacked, and loudly dismissed, but never officially denied) trigger a campaign within the White House to move against Fitzgerald's office?

Has the investigation been closed? If so, by whom?

Where in the world is Patrick Fitzgerald?

Perhaps we should be asking "Where's Fitzgerald's family?" Could it be they've been kidnapped and he's having to go along with the kidnappers' demands in order to get them back alive?

I joke, but once you have an administration that believes the ends justifies the means, then really, all bets are off, aren't they?